Author of The Great Chocoplot 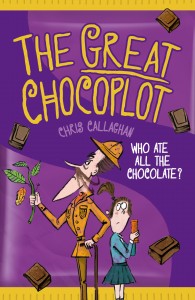 Chris’ first job was on a Pick 'n' Mix counter, followed by a career in the Royal Air Force as an aircraft mechanic. Even though fully trained on how jet fighters work and fly, he still suspects that there is a little magic involved somewhere.

Then as an Environmental Scientist he spent a lot of time getting wet on factory roofs, measuring pollution. He left all that behind to become a Stay At Home Dad where his brain began fizzing with stories. His wife and daughter kept insisting that he wrote some of these stories down. So he did.

Chris Callaghan in the news

A couple of years ago we held our first Open Coop – a one-day amnesty in which writers could send their stories directly to us. From the huge amount of submissions we received, we discovered a brilliantly funny and quirky novel centering around the horror of all horrors: a chocopocalypse!