Author of Alice Dent and the Incredible Germs 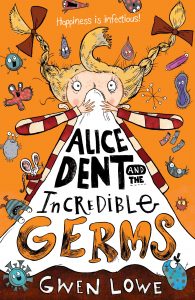 Gwen Lowe is a consultant Public Health doctor in Wales who describes her job as being like a medical detective. Working with a special team, she has to urgently discover what is making people ill and then stop it before anyone else gets ill too. Previously, she has been a hospital doctor and a GP as well as a hotel washer-upper, a restaurant table clearer and a postwoman. Married with a daughter, over the years she has found herself spending time with ever-changing pairs of rescue guinea-pigs, the school rats, elderly hamsters and other little creatures.