As well as winning in the YA category – facing stiff competition from a whole host of fabulous YA authors, including our own Natasha Farrant and Lydia: The Wild Girl of Pride & Prejudice – Sophia scooped the overall prize: the RoNA's highest accolade, the Goldsboro Books Romantic Novel of the Year. 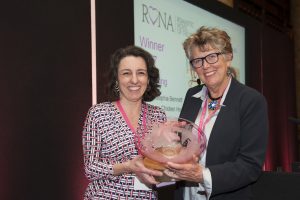 Her seventh book for Chicken House, Love Song features Sophia's trademark emotional and inspiring writing style whilst exploring the fantasy of every music-loving teen: making it into the inner circle of the hottest boyband. Sophia expertly navigates themes of identity, creative inspiration, the falseness of fame, and of course: true love.

A million girls would kill for the chance to meet The Point, but Nina’s not one of them. She’s the new assistant to the lead singer’s diva fiancée, and she knows it’s going to suck. She quickly learns that being in the hottest band on the planet isn’t as easy as it looks: behind the scenes, the boys are on the verge of splitting up. Tasked with keeping an eye on four gorgeous but spoiled rock stars, Nina’s determined to stick it out – and not fall for any of them …

Congratulations! I love the scrap book you keep filled with interesting pics and stuff; what a great idea. I just hope I'm able to get a copy of 'Love Song' sent over here in Malta.