It's a double celebration in the Chicken House this week, as The Island at the End of Everything by Kiran Millwood Hargrave scoops not one but TWO major awards shortlistings!

We are overjoyed that Kiran's stunning novel has been shortlisted for both the Costa Book Awards and the Blue Peter Book Awards. Eeek!

You might already know Kiran's previous novel The Girl of Ink & Stars, which won both the Waterstones Children's Book Prize and Children's Book of the Year at the British Book Awards. Yup, she's a star and her books are awesome. 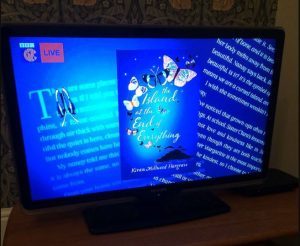 Island on Blue Peter, as spotted by super-ed Rachel Leyshon!

The Island at the End of Everything is an irresistibly poetic story of belonging, finding your way home and the unbreakable bond between mother and daughter. A standalone tale rooted in history, this is a story that will stay with you long after reading. (It might also make you cry a bit.)

Ami lives with her sick mother on an island where the sea is as blue as the sky. It’s all she knows and loves, but the arrival of a cruel government official, Mr Zamora, changes her world for ever. Her island is to become a colony for sufferers of leprosy. Banished to an orphanage across the water, Ami meets a honey-eyed girl named for butterflies, and together they set out to find a way back home to the island at the end of everything.

We're so pleased that the judges love Island as much as we (and readers) do! You can grab your copy here or get a feel for it for reading the first chapter here.