It's Valentine's Day! Why not start off the most romantic day of the year with some of our most romantic reads? Whether it's an epic time-slip romance, a hilariously awkward teen comedy or a dark and dangerous Mafia tale: we've got something for everyone ...  END_OF_DOCUMENT_TOKEN_TO_BE_REPLACED

Inferno is out today!

To celebrate the release of Inferno, the second explosive installment in the Blood for Blood trilogy, today we have a guest post from author Catherine Doyle!  END_OF_DOCUMENT_TOKEN_TO_BE_REPLACED 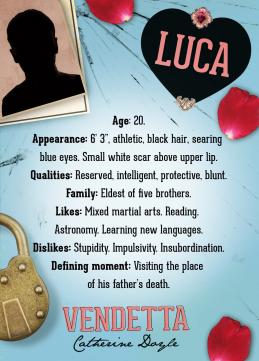 A very happy 2015 to all! We're already really excited about what the year holds, not least because January is already off to a flying start. This month sees the release of both Catherine Doyle's dark YA romance VENDETTA and Dan Smith's thrilling action adventure BIG GAME, soon to be a major movie.

VENDETTA tells the story of Sophie, who is thrown into an unknown world of danger, love and revenge when the Priestly brothers move into town. Gritty, romantic and totally compelling, VENDETTA is set in present-day Chicago against the murky morality of the criminal underworld ...

For Sophie, it's a long dull summer in the Chicago suburbs until five mysterious brothers move into her neighbourhood. A chance encounter with one of them leaves her breathless. But all is not what it seems.

As the secrets of Nic's Sicilian heritage emerge and Sophie falls deeper into his world, her own family skeletons come to life. Caught up in a twisted game of revenge between two warring dynasties, the choice between love and family suddenly comes at a deadly price.

For slightly younger readers, BIG GAME is the perfect new year read. A thrilling survival story set in the Finnish wilderness, page will become screen in May - keep an eye out for the blockbuster movie starring Samuel L. Jackson!

13-year-old Oskari is sent into the cold wilderness on an ancient test of manhood. He must survive armed only with a bow and arrow. But instead, he stumbles upon an escape pod from a burning airliner: Air Force One. Terrorists have shot down the President of the United States.

The boy hunter and the world's most powerful man are suddenly the hunted, and so begins an extraordinary survival race against a powerful and deadly enemy ...

You can find both of these amazing new releases in stores now - what are you waiting for?