The days are getting shorter, the leaves on the trees are falling and the first pumpkins are being carved . We all know what this means ... Halloween is upon us!

To celebrate the season of all things ghosts, ghouls and grisly ends, we have chosen our favorite spooky reads for you to pick up this Halloween season to get you in the mood. So lock your doors, check under your bed, sit back and let the jump scares begin ...

THE ASH HOUSE by Angharad Walker 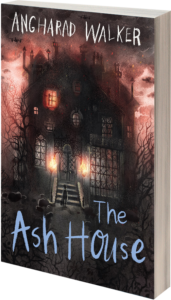 A new boy arrives at the Ash House.

He can’t remember his name – or why he’s been sent there. Given the name Sol, and troubled by a mystery pain that no medicine can cure, he joins the gang of children living in the shadows of the secretive house, doing what they can to survive. Soon, however, there’s more for the children of the Ash House to face – unless Sol’s new-found friendships can defeat the darkness that descends with the arrival of the Doctor …

When there’s a murder in Twinhills and a hag is heard howling at the inn, Raven Charming realizes she may not be the only secret witch in the village.

She could have a rival – one who practises the worst kind of magic. With the help of amateur sleuth, Mortimer Scratch, and Nightshade, a talking cat with a feline sense of detection, she sets out to solve what’s been going on …

HIS ROYAL HOPELESS by Chloë Perrin 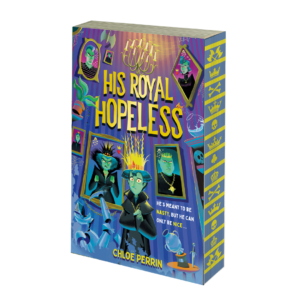 Robbie is heir to the evilest dynasty in the world: the Sinistevils.

He can’t wait to pledge his heart to the menacing power of the family Sceptre and embark on his bloodthirsty future. The thing is, Robbie is … well … nice. And when he discovers his heart has been swapped for clockwork, he’s incapable of believing Mother had dark intentions. Instead, he embarks on a quest to retrieve his heart, claim his wicked destiny, and secure Mother’s pride at last. But Mother has other ideas …

THE GHOST OF GOSSWATER by Lucy Strange 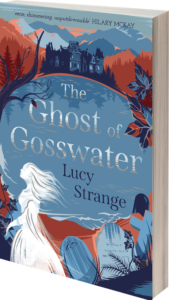 The Earl is dead and cruel Cousin Clarence has inherited everything. Twelve-year-old Lady Agatha Asquith is cast out of Gosswater Hall to live in a tiny, tumbledown cottage with a stranger who claims to be her father.

Aggie is determined to discover her real identity, but she is not alone on her quest for the truth. On the last day of the year, when the clock strikes midnight, a mysterious girl of light creeps through the crack in time; she will not rest until the dark, terrible secrets of the past have been revealed ...

THE PECULIAR TALE OF THE TENTACLE BOY by Richard Pickard 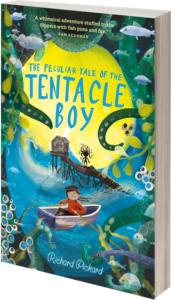 Unfortunately, she doesn’t care for fish; she loves telling stories. Marina finds her best story yet when she explores the ruined, haunted pier: a boy called William with a head of tentacles and crab claws for hands. He has lived on the pier all his life, cared for by a fisherman who has since disappeared and who warned him always to remain hidden. Together, the pair resolve to unravel the mystery of his past – but danger lurks among the fishmongers … 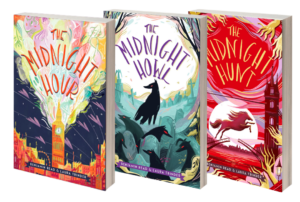 They must have come from under beds, out of mirrors, up from caves, and down from attics; all out of the darkness and into the moonlight. They were the Night Folk, and this was their world.

Emily's parents have vanished into the secret world of the Midnight Hour – a Victorian London frozen in time, home to magic and monsters. Emily must find them in the city of the Night Folk, armed only with a packed lunch, a stowaway hedgehog, and her infamously big mouth. With bloodthirsty creatures on her tail, Emily has to discover the truth to rescue her parents. What family secret connects her to the Midnight Hour? And can she save both worlds before she runs out of sandwiches?

The sequel to the magical The Midnight Hour!

Emily needs to work out why magic is leaking from the Midnight Hour, but her shape-shifting Pooka relatives and a terrifying haunting are standing in her way – not to mention the fact that she’s supposed to be grounded. If she can’t work out what’s going wrong, it could mean the end of the midnight world …

Emily is locked out of the Midnight Hour, and things have grown dangerously dark in Victorian London.

Her friends and family are on the run from the terrifying Midnight Hunt, while the foul Make Britain Dark Again party schemes to break the spell that keeps both  worlds safe. It’s going to take more than just Emily’s big mouth to fix this one. But how’s a girl meant to save the day (and night) when she’s all out of snacks and her possibly-magic pocket hedgehog is hibernating?